I knew when I was a student at Mullins High School that I wanted to be on the radio. Little did I know that over 30 years later, I would still be doing it and loving every minute of it. I started in 1980 on WLSI-AM spinning 45 records and witnessed the industry change from that to the digital music we have today. Country Music has always been my favorite and over the years have met or interviewed some of the giants of the industry. It was not uncommon for the artists to stop by the local radio station when they were passing through. Hank Williams Jr, Gary Stewart, Dwight Yoakam, Vern Gosdin, Mickey Gilley, Ricky Skaggs, Keith Whitley, Lee Greenwood and Jerry Lee Lewis are just a few of the artists I’ve had the pleasure of interviewing over the years. It still happens today with many unknown performers who are just trying to launch a career. Some will make it. Some won’t, but they are all very talented.

I have 2 wonderful daughters, Jessica Potter who lives in Charleston, WV and Shelby Meek who is a student at Morehead State University. 1 Grandson, Jakob Potter who lives with his mother in Charleston. On August 4, 2012, I became married to my blushing bride Brandy and became step-father to her 3 sons Austin, Cody and Zack. I am very happy with what I am doing hope that you get a little enjoyment out of it. 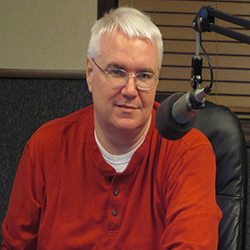